Luis Prada answered 3/25/2010
What Are The Most Destructive Computer Viruses Of All Time?
In the grand view of human history, computers are a fairly recent development. Today they are everywhere, but only 50 years ago the idea of a computer in every home and in everyone’s hand was a thought found only in science fiction novels. But just as regular viruses have been tormenting the human body since … Read more

Luis Prada answered 2/26/2010
Are There Any Untranslatable Words?
Words. Without them we’d all be really, really good at charades. And we probably wouldn’t have gotten this far as a society. What moved us further ahead was our ability to understand one-another's idea’s across the language barrier. By learning about the experience and culture of others through passing their words through a filter that … Read more

Luis Prada answered question 2/3/2010
Are There Any People That Are Nearly Indestructible?
Comic books have nurtured this idea in our heads that maybe -- just maybe -- we can one day be super powered. Maybe we can one day learn to fly, or stop a speeding bullet, or even become invincible to harm. While the first two are still in the realm of the impossible, the last … Read more

Luis Prada answered 1/5/2010
Who Are The Most Successful Dropouts?
Who says you actually have to complete you education to change the world? Well, tons of people, really. But, still. There have been, and there still are, plenty of very successful people out still that gave up on school to achieve their dreams. And they did. In a big, big way.

Luis Prada answered 11/25/2009
How Many Times Has The World Been On The Brink Of Nuclear War?
Sure, everyone knows about the Cuban missile crisis, that terrifying month of October in 1962 when the world braced itself for nuclear annihilation.  But that wasn’t the only time the world almost came to blows with massive nuclear arms. There are dozens of instances that saw tensions rise and itchy trigger fingers hovering over large red … Read more

Luis Prada answered 11/10/2009
What Are Some Real Life Spy Gadgets?
When we watch James Bond movies we are always amazed by Q and his massive workshop of clever toys -- watches that shoot lasers, X-ray glasses, bagpipes with flamethrowers – all fun, murderous toys of secret destruction. The crazy part of it all is that there are tons of these gadgets in real life, thanks … Read more

Luis Prada answered 11/1/2009
What Happens When Animals Are Introduced To New Environments?
Through evolution, plants and animals have learned to better adapt to their surrounding ecosystems. Eventually, human hubris intervenes as we attempt to shift what we consider the best parts of various ecosystems in to vastly different ones. Sometimes the results work out well. For example, the sweet and delicious yellow bananas we all eat would … Read more

Luis Prada answered 10/26/2009
Who Are The Most Violent Deities?
We all tend to believe that Gods are all benevolent beings that watch over us and care for us like only the most loving parent could. Nope, not at all. Most Gods are extremely violent lunatics that are vain, self-centered, and did we mention they were violent lunatics? Here are some of the most violent. … Read more

Luis Prada answered 10/19/2009
What Are The Most Bizarre Vending Machine Items?
Vending machines are typically known as the best place to get an overpriced bottle of soda, or some a packet of chips that never quite replaces the 2 meals you’ve missed that day. Most people tend to think of vending machines as small, mechanized snack food dispensaries and nothing more. However, here's a couple of … Read more

Luis Prada answered 9/17/2009
What Are The Strangest Restaurants In The World?

Dinner in the Sky 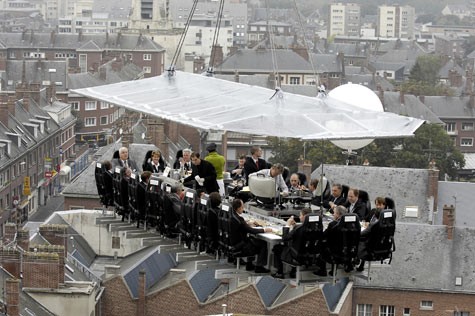 “AHHHHH! THIS STEAK IS DELICIOUS BUT—BUT…AHHHHHHH!” is the general reaction of those that eat at the traveling restaurant called Dinner in the Sky. Dinner in the Sky is one of the most absurd experiences one can have while eating, and perhaps the most terrifying as you and your party … Read more

Luis Prada answered 9/11/2009
What Are Some Real Life Examples Of Irony?
Merriam-Webster’s defines Irony as an “incongruity between the actual result of a sequence of events and the normal or expected result.”  We encounter little moments of irony in our daily lives. If I were to make up some, I would say that a Firehouse burning down out be ironic. An Olympic swimmer drowning in a bath … Read more

Luis Prada answered 8/23/2009
Has Anyone Ever Tried To Create A Real Utopian Society? 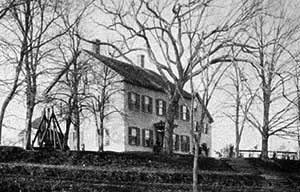 In 1841, George and Sophia Ripley had a dream. A dream of a land where everyone was self-reliant, yet, at the same time, pitched in for the community. Seeing as they were hard working people, they created this land from the ground up in West Roxbury, Massachusetts and they called … Read more

Luis Prada answered 8/16/2009
What Is Mass Hysteria?
Mass hysteria sounds like a phrase that doesn’t actually mean anything. Today, we normally use it in the hyperbolic sense. “Everyone is freaking out over these Tickle me Elmos! It’s mass hysteria!”  But, this phrase that we just kind of casually throw around is actually has some substance behind it. As it turns out, there are … Read more

Luis Prada answered 8/10/2009
Are There Really Patron Saints For Everything?
Oh, yes. There are tons, and tons of Saints – too many to tabulate, really – and they all represent a certain aspect of life, or a certain object in life, or anything in life. It almost seems like as soon as humans create a new thing, there is already a saint lined up for … Read more

Luis Prada answered 7/27/2009
Were There Ever Any Strange Olympic Sports?
The Olympics started in Olympia, Greece in 8th century B.C., and ran until 5th century A.D. After years of being ignored, a man named Pierre de Coubertin decided to honor the original Greek games by putting on what is now considered the first Olympiad in 1896. The games played during this first Olympiad were fairly … Read more

Luis Prada answered 7/20/2009
What Are The Greatest Bacon-Related Things People Have Created?
Bacon. It is the food of the Gods. It may have taken sometime, but the internet finally caught on to this wondrous pig product. This once very basic breakfast food has now achieved the legendary status it so rightfully deserves. Of all the things in our modern world that get unnecessarily hyped to the point … Read more

Luis Prada answered 7/14/2009
What Are The Strangest Eating Disorders?

Luis Prada answered 7/7/2009
What Is A Spite House?
For as good as humans can be, we have a far greater capacity to be angry and vengeful. This vengeance takes many forms; some kill, some cheat, some will glue your butt cheeks together while you sleep. But few go as far as erecting a building as a monument to their anger toward another. … Read more

Luis Prada answered 6/30/2009
What Are Some Of The Dumbest Things Ever To Be Blamed On Video Games?
Anyone that is deeply entrenched within the world of video games knows how much unnecessary blame gets slopped on to the industry. If within the home of a serial rapist an Atari 2600 and a copy of Donkey Kong were found, some out of touch “voice of reason” would soon announce that the pixilated gorilla's … Read more

Luis Prada answered 6/23/2009
What Are The Strangest Amusement Parks In The World?

If you're one of the few people that walked out of “The Passion of the Christ” wondering “I really wish I could see a man getting beaten to a bloody pulp for 2 hours…LIVE!” then the Holy Land Experience will make your twisted heart sing with…maybe not … Read more

Follow
Luis Prada
I'm a freelance comedy writer on these here internets. My work can be found at...

FunnyCrave.com (where I am a full time contributor, columnist, and editor)